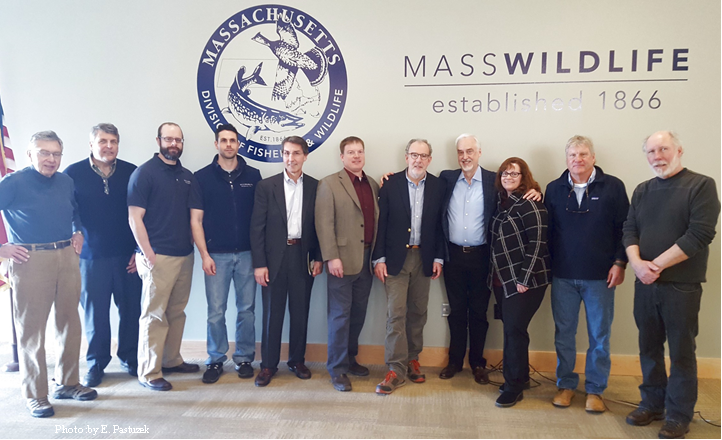 Putting a great partnership to work

MassWildlife’s new field headquarters building was built for days like last Saturday. In one room, there was a class on rod building. In another, fly tying was being taught. And in the big meeting room, about 100 people had come to hear biologists and Trout Unlimited authorities who are working to save our native brook trout and fast-disappearing cold waters that support them.

The building continues to impress — and not just for the toilets that have two flush modes, one for liquid waste and one for solid waste. Its exceptional acoustics permitted all the speakers to project with barely the need for a microphone.

MassWildlife Director Jack Buckley and Assistant Director of Fisheries Todd Richards opened the ceremonies, highlighting the exceptional science staffing with talented biologists at the Division in recent years. They also praised the Division’s big investment in land acquisition and management.

MassWildlife Watershed Project Leader Jason Stolarski began the informative morning explaining how their scientists now have an historical database to keep track of trout and other fish in more than 11,000 individual water bodies around the state. The data varies greatly in completeness, so data collection is ongoing, but the specific information on each water body gives an invaluable profile that can be used in many ways.

Becca Quinones, stream biologist project leader, apprised us of how climate change is greatly impacting brook trout, and other species as we’ve witnessed a 1.5-degree increase in temperature each decade over the last 40 years. We’re now experiencing more frequent and more severe droughts and getting more precipitation in the form of rain rather than snow, so there’s been a trend for less snow-melt, which has its own consequences.

Peak water flows are now occurring two weeks earlier than they used to, and overall, we now have about 30 percent fewer cold-water resources for trout to live in. By 2100, if we don’t address the causes of global warming, it’s projected that we’re likely to have a climate similar to that of South Carolina and lose 60-90% of our cold-water fisheries. All these factors are great challenges to our native brook trout. Trout fishing as we know it may very well be a thing of the past here for future generations.

Quinones emphasized the importance of limiting stressors to trout, carefully considering flow, temperature, and sediment. We need to remove dams and culverts that isolate fish and cause backed up water to warm. We have to minimize ground water pumping for human developments when it empties brooks and streams and kills off trout populations.

Coldwater fishery project leader Adam Kautza hammered home the devastating effect that our drought — the worst in recent history — had on our native trout. Fish became concentrated in isolated pools, where they experienced increased competition for food, space and spawning habitat. Low flows aren’t strong enough to flush out harmful sediments that build up in streams. Coincident with greater concentration are more parasites, disease and predation.

Many trout this year were isolated in tiny ground water-fed pools and had no place to escape. These vulnerable little habitats are the last stronghold of our native brook trout. Expanding human populations near cold-water trout streams have further contributed to ground water being lowered while diminishing the protective land cover that is needed to minimize sedimentation and keep waters cooler.

MassWildlife Chief of Wildlife Lands Craig MacDonnell spoke of the tremendous role MassWildlife, with the help of sportsmen, has had in land acquisition. His most poignant advice for those who would like to help wildlife and wild land is to join a local Land Trust.

The second half of the fisheries forum was presented by Trout Unlimited leaders. Warren Winders, board member of the Southeast Chapter of Trout Unlimited, detailed the amazing restoration and protection of Red Brook, a former sea-run brook trout stream that eventually flows into Buzzards Bay. This inspirational saga is a story of how the Lyman family generously donated more than 600 acres of their land around the brook, and how TU members and other local volunteers worked to remove dams and end the warming effects of upstream cranberry bogs. Winders made it clear that dams collect sand, salt, and spread water out over a broad, shallow area, dangerously warming the water for trout.

TU’s Michael Rosser told us about the Gulf Brook and Sucker Brook restoration work up around the Nissitissit River. They replaced isolating culverts, and addressed the severe bank erosion caused by ATV use. They replanted native plants including black gum trees and wildflowers, transplanted endangered brook floater mussels, and installed fences to stop the ATVs. To improve the brook, accumulated sand had to be hauled out. It was deposited on high ground for a turtle-nesting site.

Rosser let us know that this work isn’t cheap. Trying to remedy the destructive work of an ill-advised dam constructed earlier can easily cost $300,000. While TU chapters can’t afford that kind of contribution, they can and do provide seed money to enable larger groups to subsequently come in, contribute the big funding, and finish the job.