The removal of the ‘Millie Turner Dam”

Removing the dam reduced dam owner liability and protected Town infrastructure and resources from the threat of a catastrophic dam breach. The High Hazard, Poor condition dam posed a risk to the Route 111 Bridge and residences downstream. The dam exacerbated upstream flooding. Had the dam not been removed, it would have continued to deteriorate during flood events and eventually failed.

Removing the dam cost $330,000 including design and permitting compared with an estimated $2.8 million to repair the dam. Funding came from the National Fish and Wildlife Foundation’s Hurricane Sandy Resilience Program and DER. MassWildlife provided matching funds associated with land acquisition to protect 17 acres of wildlife habitat surrounding the site.

DER and MassWildlife led the project in partnership with the Town, the private dam owner, US Fish and Wildlife Service, Squan-a-Tissit Chapter of Trout Unlimited, Nashua River Watershed Association, Nashoba Conservation Trust, MA Outdoor Heritage Foundation, Nissitissit River Land Trust, and others within the watershed. Gomez & Sullivan was the project engineer and T. Ford Company was the construction contractor. 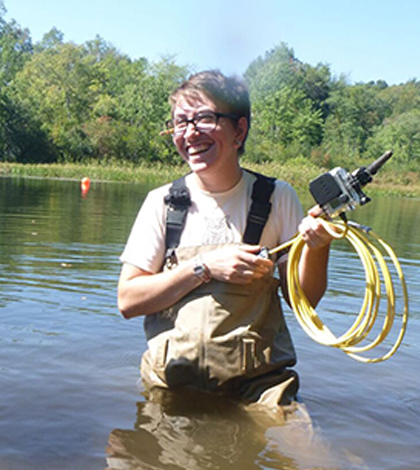 Researchers at Keene State College are investigating the effects of dam removal on downstream sediment deposition, according to a release. Their work is taking place on the Nissitissit River in Massachusetts where the Millie Turner Dam was recently removed.

Scientists at the university, including student researchers, documented sediments in the river upstream and downstream of the dam before its removal. Not surprisingly, areas downstream were starved of sediment before the dam came down. But the big question was really how quickly sediments would surge downstream after the Millie Turner Dam was removed. There was concern that too much too fast could harm aquatic life, including a rare mussel species living there.

To answer that question, investigators have used underwater cameras to document sediments in the river. With the dam removed in 2015, their work has shifted to focus on the impacts. The investigation is still ongoing, but has so far revealed that sediments aren’t returning downstream as quickly as some had predicted. Researchers believe it will still be another year before the full effects of the shifting sediments can be seen.